In order to keep up with increasing expenses, 4ADA’s variable pool fee was recently raised from 0% to 1%. If you are delegated to 4ADA, how does this increase impact your staking rewards? Much less than you might think!

The example below shows the differences in staking rewards for a stake delegation of 100,000ADA, depending if a pool applies a 0%, 1% or 2% variable fee. 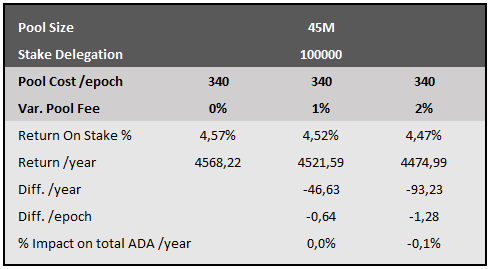 This means that if the ADA price in- or decreases by 1% on any given day, this roughly has a 20-times bigger impact on the total value of your ADA than what a 1% difference in variable pool fee makes over a whole year!