Since quite a few epochs, W4ADA’s rewards have barely exceeded the minimum 340ADA fixed pool cost, as imposed by the network protocol, causing most of the rewards to flow to the pool owner rather than to its delegators, despite dropping the variable fee to 0% about a month ago.

W4ADA has successfully minted each of its assigned 229 blocks ever since its inception on July 30 of last year, with the exception of just 3 orphaned blocks.

But somehow W4ADA has been suffering from very unlucky slot leadership allocation all throughout its life, as demonstrated by its very low “luck”-factor on Adapools.org, and resulting in a lifetime ROS that does not meet our standards:

We want the best staking experience for all our Delegators

Producing more rewards for ourselves than for our delegators is something we cannot accept, as we want our delegators to have a long term positive staking experience above all.

For this reason, we have decided to retire W4ADA in epoch 253,
which means it will no longer produce rewards from
epoch 254 (March 17) onwards,

Delegators should re-delegate their stake before the end of
epoch 252 (March 11), to ensure on-going rewards after epoch 253.

Delegators who do not re-delegate in time, will stop receiving W4ADA rewards (which currently aren’t very high to begin with) from epoch 256 onwards (payout date for epoch 254).

If you are a W4ADA delegator, please accept our apology
for the inconvenience of having to re-delegate your stake.

Our decision to retire W4ADA has been taken with your best
interest in mind, given that your re-delegation will lead to
higher rewards in the long run!

Re-delegate your W4ADA stake to 4ADA to receive a loyalty bonus!

To show W4ADA delegators our appreciation for their loyalty, and to compensate for the inconvenience of having to re-delegate, a 20 ADA loyalty bonus will be offered for every re-delegation to 4ADA or F4ADA, using one of the current W4ADA stake keys below, provided the re-delegation takes place in March 2021 and lasts at least until epoch 260. Just look yourself up on pooltool.io and drop us an email to notify us of your re-delegation or for any questions. 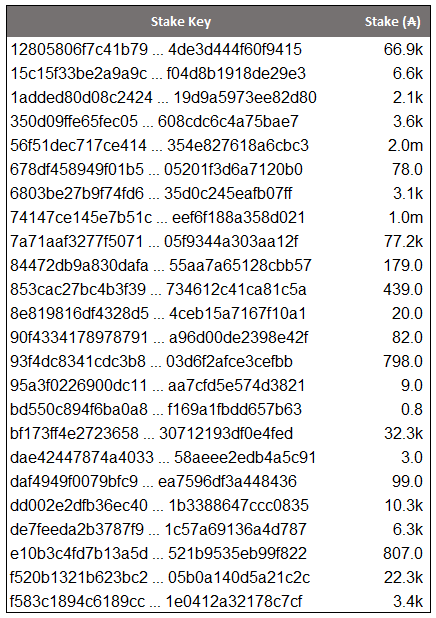 Although IOHK announced in november last year that the saturation point for pools would be lowered to approx. 32M ADA around this time, the date for such a change has not yet been confirmed. Since for the changeover to k=1000 pools, multiple parameters, such as the role of pledge, probably are going to be taken into account as well, we realistically do not expect any change in saturation levels within this month.

If needed, we will ensure a new pool will be available well in time before the future saturation point might impact 4ADA or F4ADA.

Instead of retiring W4ADA, we decided to rename it to GIVE and donate 100% of any future rewards it produces to charity. While it does not produce sufficient rewards to be attractive for delegators, it does not cost us any resources to keep it running, at least for the time being, so why not? 🙂 If the pool generates any rewards, we will report them on the pool page along with donation details.