How To Simulate Expected Staking Rewards

IOHK published a staking calculator, which lets you enter a number of variables to obtain an estimate of expected pool rewards. Although IOHK explicitly are mentioning the results should be interpreted with caution, it should give you an idea how various variables influence potential results.

Let’s have a look at some of the variables and how you can modify them to simulate our 4ADA pool. Make sure “DELEGATE MY STAKE” is selected, and choose “ADVANCED OPTIONS”. 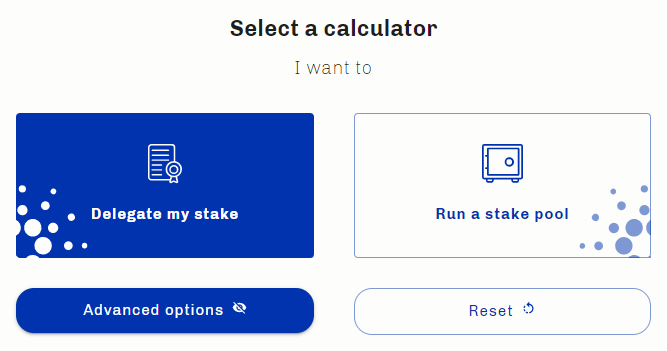 1000 ADA
This is the amount you are staking with. You can choose any amount, but make sure not to change it when comparing between pools.

68 ADA
68 per day is equivalent of 5*68=340ADA per epoch. This is the minimum fixed fee imposed by the protocol. Pools can set this higher, but not lower. The amount is deducted from total pool rewards every epoch, before calculating the rewards for all delegators.

Just to clarify: 340ADA are NOT deducted from your personal rewards. And, you do NOT have to pay 340ADA to a pool when delegating.

IMPORTANT: most pools leave the 340ADA fixed fee per epoch at its minimum, but pay attention, as there are some pools which charge more than that, which has a substantial impact on rewards, especially if the pool is small!

0 ADA
Whenever a pool produces a block, it not only receives a block reward, but also all the transaction fees for all transactions contained in that block. In the long run this is expected to become an important factor, but for the time being let’s leave it at zero.

300,000 ADA
This amount is better known as PLEDGE. It is the amount of ADA permanently delegated by the pool owner, and is indicative of the pool owner’s own ‘skin-in-the-game’.

The significance of pledge is merely symbolic. It demonstrates a pool owner’s confidence in its performance, but whether a pool has low or very high pledge has very little influence on its rewards.

Once a pool approaches its saturation level (62M ADA), its rewards can get capped every now and then, resulting in less than optimal rewards for its delegators. On the other hand, very small pools sometimes may not produce any rewards during an epoch. For this reason it is wiser to delegate to mid-sized pools, ranging between approx. 2M~50M, especially if you do not monitor their growth on a regular basis.

500
Also referred to as “k-factor”, this fixed protocol parameter determines how large a pool can get before its rewards saturate. It implies that over time it is expected that there would be 500 perfectly filled pools producing optimum rewards. In reality, pools will never be perfectly filled, leaving room for more than 500 smaller pools to co-exist.

2%
This variable pool fee, set by the pool operator, is automatically deducted each epoch from delegator rewards, and serves as compensation for the staking service rendered. Pool operators use this fee (and the fixed fee) to cover their expenses and keep their pools -and the Cardano network- healthy.

Contrarily to what most delegators think, the impact of variable fee on rewards received is not very high at all. For example, for a delegation of 1000 ADA, the difference in rewards after one year, between 4ADA (2%) and a 1% pool, is only 0.53 ADA, or 0.05%! Don’t believe it? Check for yourself by changing the variable fee in the calculator, leaving everything else unchanged.

100%
This represents the percentage of blocks missed by a stake pool. For consistency between pool comparisons, simply leave this at default (100%).

0.3
Better known as the “Pledge Factor”, this fixed parameter determines the impact of the pool’s pledged amount on the rewards for all delegators. Currently, at 0.3, the impact of pledge is almost non-existent, giving a pool’s pledge amount above all subjective meaning, indicating to what extent the pool operator is able and willing to link their own delegation results with yours.

20%
The percentage of total rewards per epoch paid out to the Cardano Treasury, before distributing all remaining rewards to all delegators and pool operator’s. Leave at default (20%).

0.3%
This represents the inflation-rate of the protocol, and determines how many ADA are added to the total supply every epoch. Leave at default (0.3%).

Given [4ADA]’s current size of 37M ADA, the expected ROS (Return On Stake) is 5.15%, resulting in the following gains after one year:

This knowledge should give you the freedom to perhaps choose your pool not so much based on expected rewards, but rather on other influencing factors, such as sustainability, donations to charity, decentralized vs. hosted in the Cloud etc. etc.

But why not start doing a bit of research on your own? Do let us know the results of your findings by posting a comment below!