It is fascinating to see how much effort some delegators sometimes seem to put into chasing the ultimate rewards.

Seeiing how closely pool performances are being tracked, both by delegators and by websites offering a wealth of statistics, is heartwarming and it demonstrates the engagement of our wonderful Cardano community!

Taking a look at the current pool rankings in the new v3.0 Daedalus wallet makes it very clear though, that going too far in analyzing data in trying to identify the ultimate pool, may not always be worth the effort.

Let’s for example compare 4ADA, F4ADA and W4ADA against the current number 1 pool in Daedalus. 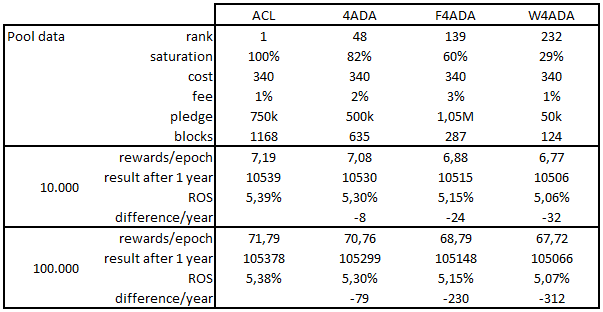 For a delegation of 1 Million ADA

Ofcourse, if you have 1 Million ADA or more to spare, it may be worth spending an hour or so to check which pool promises higher rewards, but if you “only” have 100k to spare, you will see that choosing the number 232 pool on the list, instead of the number 1, after a whole year will only set you back around 312 ADA.

Given such a small difference (between 4ADA and the #1 the difference actually only is 79 ADA), wouldn’t you agree other factors such as sustainability or welfare actually might play a more important role?

I agree, 79 ADA buys you a few beer, and let’s hope 312 one day might actually buy you a really nice dinner, but since 312 ADA only represents 0.3% of your 100k capital, do you really care? I’m not a financial adviser, but you might be better off selling your stack and buying it back 0.3% cheaper, which could happen in just under a minute. Still well in time to catch your taxi on your way to the restaurant 😉

P.S. 1
ACL ranked #1 for delegation amounts of 1k and 10k (slider in Daedalus). ATADA ranked #1 for a 1M delegation (in this case, ACL ranked 40). The rankings of ACL and ATADA at the time of writing this blog post were purely coincidental. Both pools are great and we wish them well!

P.S. 2
About the differences between the 4ADA pools

The difference in rewards between 4ADA, F4ADA and W4ADA are mainly caused by their size; the more closely it approaches saturation (64M), the more efficiently the 340ADA fixed cost is divided among all stakeholders. If all 3 pools were equally big, their expected rewards would be virtually identical, as 1% difference in variable fee is hardly noticeable on the end result.

Now you might wonder, why is anybody not in 4ADA, since 4ADA is promising higher rewards? Well that is because the actual rewards so far have been different from expected rewards; where 4ADA’s block assignment has been pretty close to what in theory was to be expected, F4ADA received more blocks than expected delivering higher rewards than average, and W4ADA has been rather unlucky, with block assignment so far being almost 20% less than expected on average. This again proves that the random block assignment has a much greater impact on pool performance than their actual parameters. And since randomness by definition cannot be predicted, one might as well just ignore the rankings and just stick with the pool that makes you feel GOOD 🏖️